Giving to Those in Need 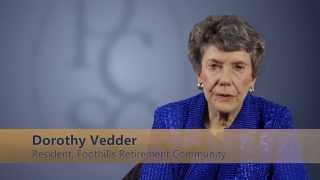 MINUTE FOR MISSION Christmas Joy gifts help ensure dignity for a faithful church servant’s final years As an urban minister for more than 40 years, Bob Forsberg dedicated his willing hands, generous heart, and sharp mind to serving people society had cast aside. Last year however, at age 91, the mental capacity that had served this Presbyterian minister so well began to fade. His memory loss became so debilitating that Bob, after years focused on helping others, found himself in need of help. Bob’s retirement income was enough to pay the bills at his retirement community in Oakland, California, but he had few other resources. Before retirement, Bob had earned a modest salary at Wider City Parish, serving among economically disadvantaged people in New Haven, Connecticut. Bob believed he should be paid no more than the average worker in his impoverished neighborhood. He and his family qualified for public housing and made their home there. Yet Bob was adept at leveraging ministry funds from churches and charitable foundations for initiatives ranging from youth work to affordable housing. He advocated for better schools in his community and for civil rights, both locally and nationally. In retirement, Bob relocated to the West Coast to be near his children. He eventually moved to a retirement community and functioned well in an independent living unit until last year. When dementia forced him to move into a memory care unit, the added service was more than Bob could afford over the long term. His children were grieved by the possibility of having to move their father to another facility. “We looked around at places nearby in the price range that we could afford, but it was very upsetting to see those conditions and to think about my dad being in those circumstances,” says his daughter, Barbara Forsberg. Thanks to gifts made to the Christmas Joy Offering, Bob didn’t have to move. Help from the Assistance Program of the Board of Pensions has enabled him to receive high-quality care in familiar surroundings. “For a family like ours and for a person like my dad, who has served his entire career in the Presbyterian Church, it has really been a lifesaver,” Barbara shares. “I don’t know if he would be doing so well if we had to move him to another place.” Barbara notes that it was generosity, a trait that Bob so faithfully incarnated, that came to Bob’s aid in his time of need. That circle of caring is possible because of congregations like ours that give to the Christmas Joy Offering. Half of the Offering will help past and present church workers and their families who are facing critical financial circumstances. The other half goes to Presbyterian-related racial ethnic schools and colleges to train future leaders. Please give generously.